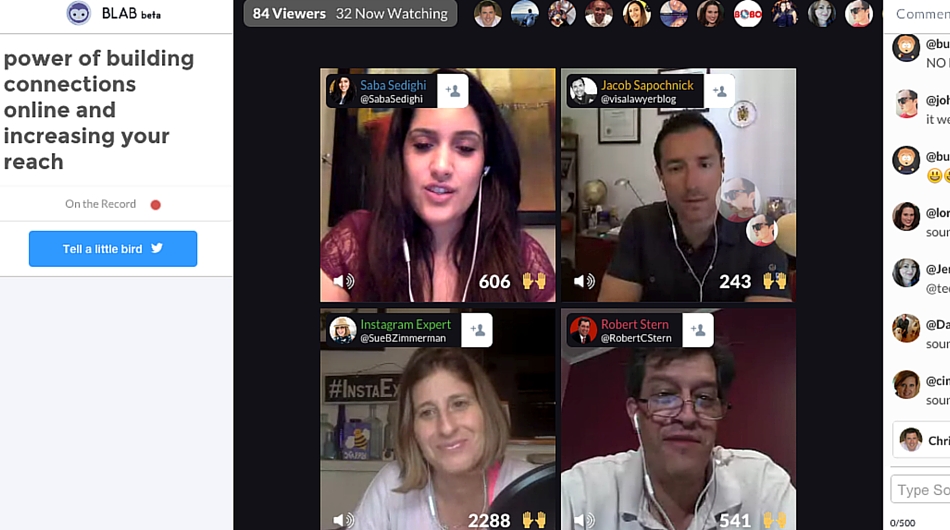 Got something to Blab about? There’s a new App for that…

It seems like recently the live streaming video app space is getting that bit more competitive. We’ve talked about Periscope, Meerkat and YouNow, but the new kid on the block ‘Blab’ seems to have upped the ante.

Blab.im is an exciting new video chat app, taking things to a whole new level. It allows up to 4 people to video chat simultaneously, allowing others to watch and comment on the stream. Of the four who are in the video stream, they can drop out at any time, allowing another viewer the opportunity to join the video stream.

Signing up for Blab video messaging app is simple and easy – all you need are your Twitter login details. Once you have signed up you can then create a blab – each blab requires a host, who is the person who creates it. Setting up a blab is simple. Just fill in the following:

Once you’ve created your Blab a link is shared on your Twitter feed, which alerts others who are following you on Blab that you have set up a Blab. Viewers interested in taking part in your blab just need to click on the link to join the live stream.

When the chatter attempts to join the four-person chat the host of a Blab can choose to accept or deny entry. There is also an option make it disappear or to record the Blab and allow for it to be replayed later by other users – though this option does not seem to be available yet on the iOS version.

It’s similar to Periscope in that when users tap the screen to give hearts, blab viewers can like someone’s video by tapping on the little hands on the right hand side of the persons feed – something blab calls ‘feels’. The emoji of hands raised demonstrates who the most popular chatter is. Blab also gives viewers the ability to mute any or all of the four video chatters.

At this stage there seems to be no way to have a private blab – unlike periscope in which you can do a private broadcast. But this is something which I think Blab will roll out in the near future as the platform gains popularity.

Blab could have many uses, eg three reviewers commenting on a favourite TV series, artist’s latest song/new video, event or news with comments rolling in. Blabs have definitely the potential to go viral.

Blab is currently in Beta and only available on web and iOS. It will no doubt develop an android version over the coming weeks and months. Mashable calls it ‘pretty addictive’ and ‘the easiest and most social-media friendly solution’ they’ve seen to date. It’s certainly one live video streaming platform to keep an eye on.