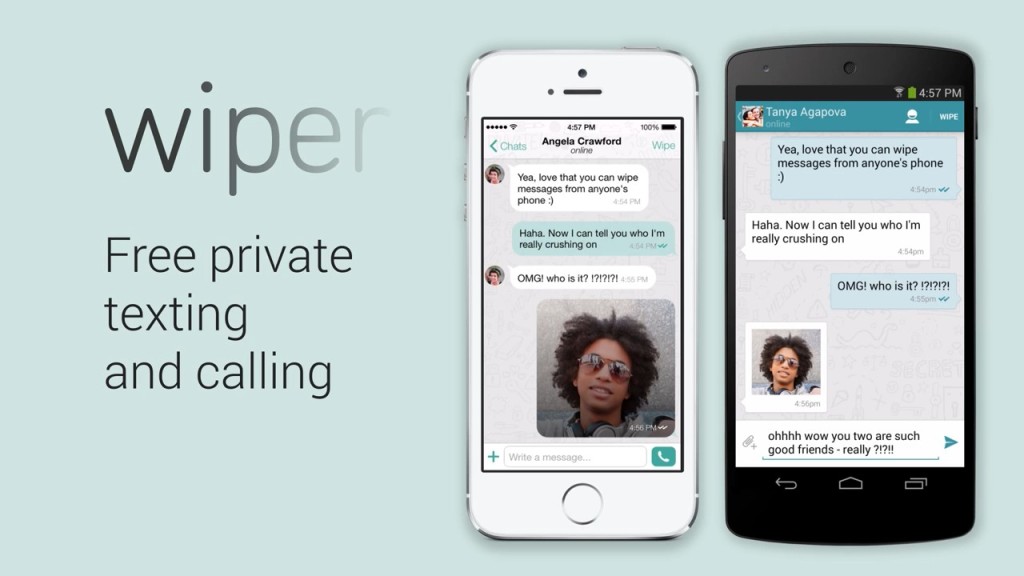 Mobile messaging Apps are pretty hot. I mean how many can you think of? Well don’t stop now as another Smartphone messaging app hits IOS & Android. This time it’s a messaging app with a big twist.

Remember the CEO of Google said that the internet needs a delete button? Just imagine having the option of permanently removing all traces of a conversation – with a single click. Well the app for it is here apparently. Wiper App offers its users the facility to ‘wipe’ messages from the sender’s phone, recipient’s phone and the company’s own servers in seconds!.

In additional Wiper Messenger uses automatic end-to-end encryption for messages and calls. Users are alerted if their conversation partner screenshots the conversation.

Users can also enable passcode protection for the app, offering another layer of protection to local users of the Wiper App.

Manlio Carrelli, CEO and founder of Wiper said they wanted to provide the illusive ‘privacy and control over your data’ many of us now crave in our share crazy world. According to Inc.com Wiper has received heavy investment from the team who sold Intermedia for $228M. So the Big Guns are interested – and investing in providing a really interesting solution to users of messaging and call apps, who want more privacy.

According to founder Carrelli, in a recent interview with Inc. ‘Once you wipe it, it’s all gone. There’s records on your phone and temporary records on our server before it’s wiped, like any messaging application, but once you tap that ‘wipe’ button it’s gone from your phone, off your friend’s phone, and off the server – there is zero record anywhere of the discussion, or even that a discussion occurred. That goes for text messages, photos, videos, and phone calls’. Wow!

There is no doubt that the messaging market is flooded with Apps offering different features for users – the biggest challenge for Wiper will be to win users across from other well known messaging platforms. Bur the carrot of offering users more privacy and control over their data might just be the silver lining users have been waiting for.