Live video to share on social networking with Meerkat App

They are sweet, especially the babies. They could be cuddly if they let you hug them – though not sure how wise that would be. I hear they have large teeth. The heart warming Meerkat has now taken on a new persona – in app form. It’s still cute.

Recently launched app Meerkat is hitting the social networking scene in the States. It gives users the ability to broadcast live video directly to their Twitter followers. The talk on the ground, at least from our guys in the States, is that Meerkat has the potential to be the next ‘Snapchat’. Especially given that Snapchat is now full of brands and our dear parents. Live streaming was always going to be a natural progression for brands and the masses and here it is.

The idea behind the app is to give users the ability to Tweet live video. So according to the folks @AppMeerkat

‘Everything that happens on Meerkat App happens on Twitter. People can only watch it live. No re-runs’.

And no preview button.

Watchers can view your video and re-stream to any of their followers in real time. Your own streams can be kept locally on your phone, but never on the cloud. Meerkat gives this advice, ‘Everyone can watch on web. Be kind’

Now for me the key words in this are ‘what happens on Meerkat happens on Twitter’. Meerkat is very appealing, not just to brands who’ll love it for obvious reasons and the general public mass market of app happy users, but to a huge group of younger users.

So.. We’re all aware how easily mistakes can be made online and content uploaded in error – or on purpose, and the damage and hurt it can cause. You don’t have to think too hard to start to come up with examples of how Meerkat could be misused, even accidently, so it’s important to bear that in mind. It has huge advantages for brands in streaming events directly to Twitter and for personal use with its potential for ‘spontaneous togetherness’ as it’s founder Ben Rubin coins it. Cheesy though that may sound, friends and family could make great use of this, ‘unfiltered intimacy’ is encouraged by the founders, though I’d advise erring on the side of caution in this area.

One thing’s for sure, it’s popularity is growing and because Twitter is all about ‘The Moment’, Meerkat App seems to fill a void, at least for now, in allowing users to send out a link to their live broadcast video on what they are actually doing – right now.

It’s ephemeral qualities, like Snapchat, enable the video and comments to disappear once the broadcasting is over. But bear in mind snaps can be taken throughout the video to share.

CNBC have jumped onboard excited that viewers can ‘get the perspective that they’re ‘inside’ the stories they’re broadcasting’. Big brands Starbucks, Mastercard, Perrier, Spotify, Bonobo are early adopters. So enjoy, but take extra care not to video ‘unawares’, which could be easily done and that you’re happy to go with the flow of natural events with videos that are pushed to followers in real time via push notifications. 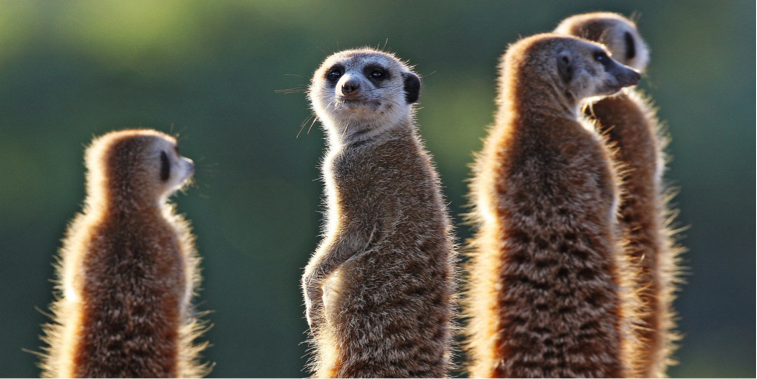 Meerkats are clever, playful, affectionate and very sociable. But they can bite – clean through your hand. As always the best advice we can give is check Meerkat out, be fully aware that there is no preview, careful with what you video and if you don’t want it going online and being seen or broadcast – and commented on to and by a global audience, don’t post it on Meerkat or any other online platform.

Will leave you with a quote from VP of Innovation Technology, Layne Harris, ‘There’s nothing quite like knowing what you’re watching is happening…anything could happen’. It probably will.