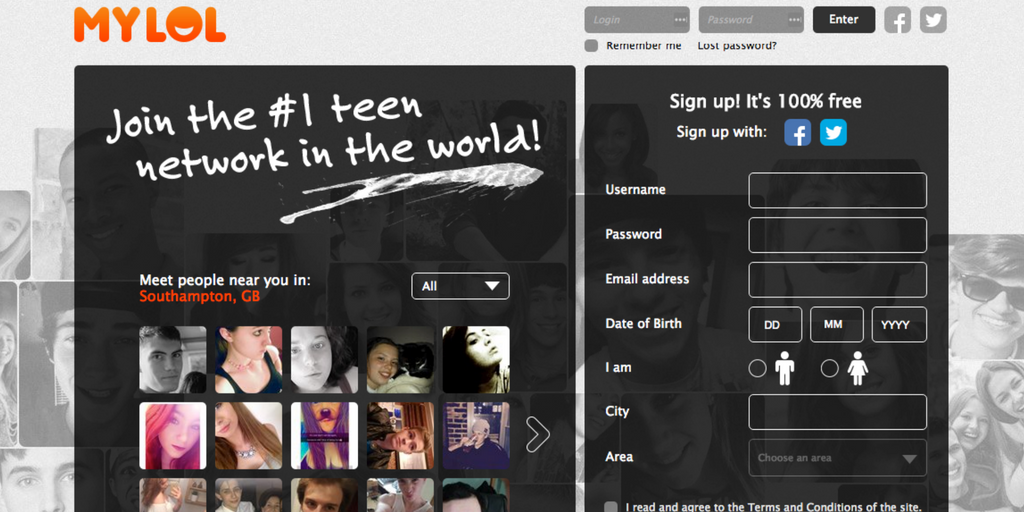 A website which claims to be the #1 Teen Dating Site in the US, Australia, UK and Canada – with 300,000 members – is fast becoming the UK’s top dating site for Under 18s.

MyLoL is available in app format for both iPhone and Android. Both the website and app offer the opportunity to meet thousands of teenagers, private chat and the ability to create your own social profile. Claims of the dangers were highlighted back in 2008 though issues have resurfaced again recently.

If you search ‘Teen Dating’ on Google the MyLOL website and app come up first in the search result.

According to today’s article in The Bristol Post, ‘A Sunday Mirror reporter posed as a 13-year-old girl to sign up to the site as part of their investigation. Within ­minutes she was bombarded with private messages from six men. Three of these were grown men. One user called Jamie69 claimed to be a 14-year-old boy from South Hayling, Hants’. He ­wasted no time asking if the conversation could be moved to a Skype video call – so they could do ‘naughty’ things. The undercover reporter replied that she had never done ­anything like that before. He then replied: ‘I’ll go first’. She then asked if he knew she was 13 and, chillingly, he said he did. Shockingly but not surprisingly a quick Google search with his details revealed he was actually an American man in his 40’s.

The NSPCC corroborated this report saying it took only 3 minutes for one of their people to find a 24 year old man messaging a 13 year old girl. The site allows anyone aged 13-24 to message, give contact details and send pictures and takes no responsibility for interaction between adults and children and teenagers.

Again, like many similar apps and websites this site was founded by a teenager – 18-year-old Australian Anthony Lipari who has registered the company in Canada. Lipari said ‘It’s up to them if they want to be open…’ and ‘They can report problems if guys are abusing them’.

A number of schools in the UK are contacting parents in relation to misuse of the app. Schools are asking them to have conversations with their children and to delete the app.

According to the Birmingham Mail, one school Alder Community High School in Hyde, near Manchester, posted on their Facebook ‘We strongly advise that you talk to your child about this and our advice would be to delete the app and block the website’.

In 2008 in the United States, according to an article in the Keene Sentinel New Hampshire newspaper, ‘A 29 year old Keene man was sentenced to one year in jail and five years probation for sexually assaulting a 14-year-old girl in Ashuelot River Park in the city’. Keene police reported that ‘the man met the girl on the Internet site MYLOL.com, a teen social networking site, and the two made arrangements to meet at the park on June 14, where they had sexual intercourse’. He has since been convicted and placed on the sex offenders list.

An article on BBC Newsbeat back in 2008 with the Children’s Charity, NSPCC said ‘MyLOL.net, which is marketed for teenagers but has hundreds of adult profiles, should clean up its act or be shut down’.

So what can parents do:

It’s important that parents stay informed, given the risks of the digital world in which children and young people are growing up in and their accessibility to technology, social media and the Internet.

This would mean adults cannot pose as children/teenagers and vice versa and any platform that does not comply could face fines or be blocked from operating in the UK.