Snapchat Group Chat with up 16 People 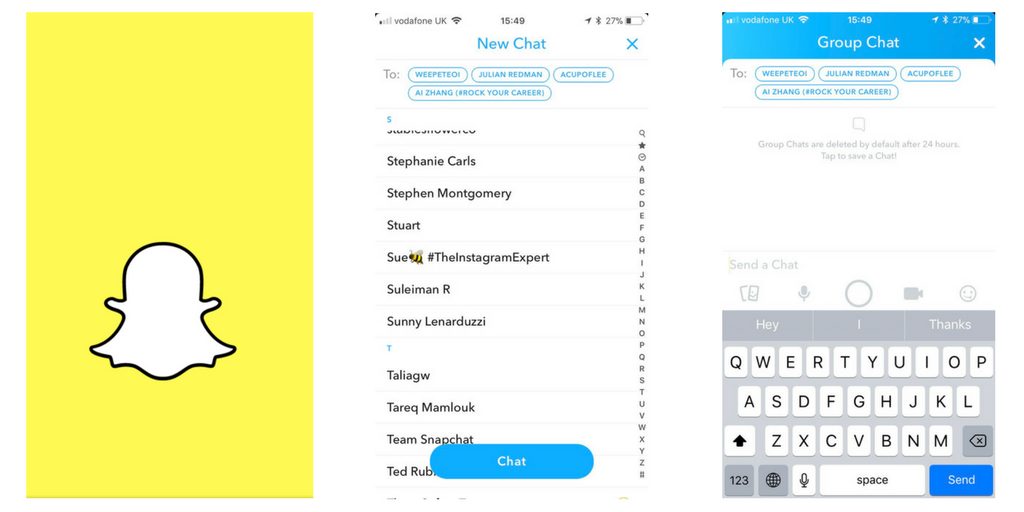 Hot on the heels of my previous blog post recently on new group video chat app ‘Houseparty’(which allows users the ability to group chat with up to 8 people at a time) – it looks like Snapchat has evolved to meet users (apparently much requested feature) to be able to create groups of up to 16 people. Take that Houseparty.

Snapchat group chat feature allows up to 16 friends to share conversation, images and media. This is also interesting – according to a article via the Snapchat Website, ‘Chats sent to a Group are deleted by default after 24 hours. Snaps sent to a Group can be opened and replayed just once by each recipient. If a Snap isn’t opened, it’s deleted after 24 hours, just like Chats’.

Sooooo..for all you Snapchatters out there, (and by that I mean the 90% of students in schools all over the world) there’s never been a better reason to take care when posting.

I know I drone on about it but please use apps features which offer message deletion after 24 hrs like these with caution. It’s still pretty simple to screen shot something using a second device and the same rules apply to time limited posts,images and texts. They can still be shared in that time frame so don’t send something you’ll regret.

Can Messages be saved in a group?

That’s a good question. The answer is Yes – messages can be saved the same way you can with private messages. Just press and hold on a message and then tap save. A note will be made of the save so all the people in the Group will see that you saved the message.

Users of Snapchat Group chat are also able to jump out of a chat and engage in a one to one conversation with a user simply by tapping on the users name. Group chats on Snapchat also include the use of stickers, video notes, vote and Bitmoji.

With the new updates Snapchat have also been rolling out new creative tools. So users can become more creative with the snaps they create. These are known as Scissors and Paintbrush. The scissor tool allows you to cut out part of a Snap on the Preview Screen to turn it into a sticker. Pretty cool eh? The Paintbrush helps you jazz up your Snaps in Memories.

The last new feature in this update I came across was the ability to be able to, what’s known as ‘Shazam’ a song. New to me but it works by allowing users to identify a song they’ve heard and like. So maybe you hear a song you like playing in background somewhere. By holding down on the camera Shazam will identify the song. A pop up will appear on screen with details of the artist and song along with a preview to listen, lyrics of the song and the ability to watch the video on Vevo – ie it’s a music video app. Brilliant!

Snapchats new features are great and they will get popular. As always take care as it has been noted in the past that sharing of SGI’s, bullying and exploitation can occur in app groups.   Snapchatters always need to be aware that there are a number of ways in which images, videos and other content can be saved and posted elsewhere around social media and the Internet. Always be careful and keep this in mind. Enjoy the new features!