It seems Twitter is deciding to join the Tagging Party by making some new changes for users to avail of, a little late perhaps?  Tweeters can now tag up to 10 users in an image a function widely used on Facebook. Now what’s also interesting about this new development from Twitter is that Tagging someone in an image doesn’t count against your 140-character message limit…..Interesting

This latest development goes one step further for iphone users by allowing them up upload multiple photos at a time up to 4 to be exact in a Tweet. Multiple image upload in a tweet is not yet available for Andriod but one suspects this will follow soon.

Now given the nature of Twitter this may present some challenges for users who would rather not be tagged in images -think about the Online Reputation aspect — so what users can do if they decide tagging is not for them and prefer twitter privacy when it comes to images  just pop into your privacy settings on  the Twitter App and make some adjustments mainly around the Photo Tagging see the image where this is highlighted in red — you can turn off Photo tagging or at least set it to only those who you follow can tag you in photos. 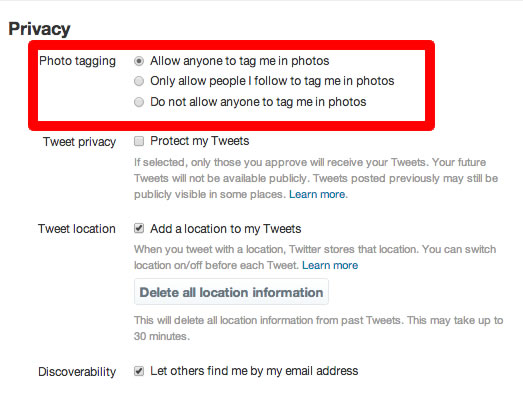