YikYak the anonymous messaging app is back 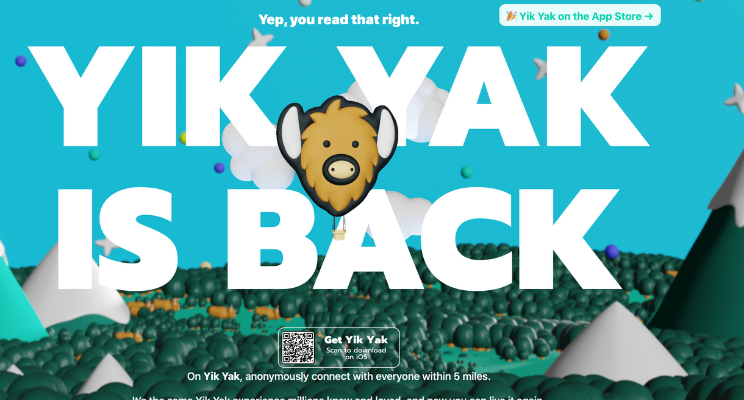 Cast your mind back to 2013 – to a once popular anonymous chat app called ‘YikYak’. Remember?

Well it’s back on Ios! With the famous tag line ‘anonymously connect with everyone within 5 miles’.

YikYak, in its past life, had its fair share problems relating to behaviour and content which took place on the platform.   With a reputation for cyberbullying, harassment and hate speech, one of the big failings of the app was how it handled its moderation and reporting of these types of behaviours.

Don’t have time to read the blog? Watch the video

For those of you who maybe don’t remember YikYak from 2013, it was originally launched as a way for college students to connect – but it also become popular among younger high school students.  The main idea behind the app was that users could post messages anonymously, within a 5-mile radius of their location. Messages could then be voted up or down by others.

During the height of its popularity YikYak was once valued at $400 million, but by 2017 downloads had slowed by 76% from the previous year, due to the increase in hate speech and violent threats and the app announced it was shutting down.

So has anything changed with the App?

From what we understand Yes & No.  According to YikYak ‘It’s the same Yik Yak experience millions knew and loved, and now you can live it again, on Yik Yak, anonymously connect with everyone within 5 miles’

The new owners of YiKYak via the website have said  ‘We’re committed to combating bullying and hate speech on the Yik Yak platform by any means necessary. YikYak goes on to state that ‘if someone bullies another person, uses hate speech, makes a threat, or in any way seriously violates the Community Guardrails or Terms of Service, they can be immediately banned from Yik Yak. One strike and you’re out’.

Is YikYak still the same platform it once was?

At this stage it’s hard to tell.  YikYak is only available in the US and on iOS although they do have plans to roll it out to more countries and also make the app available on android.  From the outset it seems that the new owners are trying to learn from the previous problems the platform faced, publishing via its website ‘Community Guardrails’ for the safety of its users.

YikYak is already # 2 in the App Download Charts in the US  – a roll out to other countries is no doubt imminent. It will experience a similar surge in the UK and Ireland therefore it’s important for parents and carers to have the heads –up on YikYak, how it works and the dangers which can exist on anonymous messaging platforms.  The best insights we have to hand are previous concerns and issues experienced on YikYak, forewarning us on what is yet to come.

What to watch for:

As Yik Yak is an anonymous app, there are child protection concerns.  Users can say anything they like, to children and young people with little consequence, start up online relationships with users of any age and still retain anonymity. It is against Yik Yak’s company policy to post other users’ private details.  It remains to be seen how effectively this is handled and enforced.