You might have seen the ? or ☹️ but when it comes to Emoji speak – many people, including us parents think it’s a trend that’s been around for a while now.  Emoji’s have in fact  been around now since the 90’s! – when they were basic but popular in MSN, Yahoo and AOL Messenger. They’ve been hard to miss for the last few years but for those of you out there who’ve no idea what I’m taking about (Cue Emoji movie!) here’s an insight into this new and not so new visual communication.

What is an Emoji?

I took a quick look at the online Cambridge Dictionary which offers this simple if somewhat dry definition,‘a digital image that is added to a message in electronic communication in order to express a particular idea or feeling’

Most, if not all of the popular apps with Teenagers today use emoji’s as a way of communicating visually as opposed to, or to elaborate on, texting.  There’s now even a standalone app called ‘Bitmoji’ (owned by Snapchat, of course) which allows you to create a customised version of yourself to be shared across a number of platforms, namely Facebook, Facebook Messenger and Snapchat.

Emoji’s are quickly becoming the universal language of the Internet – with an estimated 6 billion sent everyday. There is now even a ‘World Emoji Day’ which takes place July 17th 2018.

Dark side of emoji’s

What many parents may not realise is that as well as children and teenagers using it, the language of emoji’s is often used by adults or young peers in ‘secret’ conversations online and on popular smartphone apps.

And they don’t often mean what you think.

Deciphering emojis’ can be tricky. One symbol could mean a couple of different things.  Emoji’s have been used in apps and on social media platforms to abuse and harass.  Some are used as part of sexual conversations amongst users, mainly because opportunists understand that’s how young people talk online. Context is sometimes difficult to work out and can range from ultra-innocent to not-so-much. Here’s an example:

What makes emoji’s so difficult for parents and carers to understand is that many have no set definition – words and meanings can vary.

Below are some of the more familiar emoji’s and their general meaning: 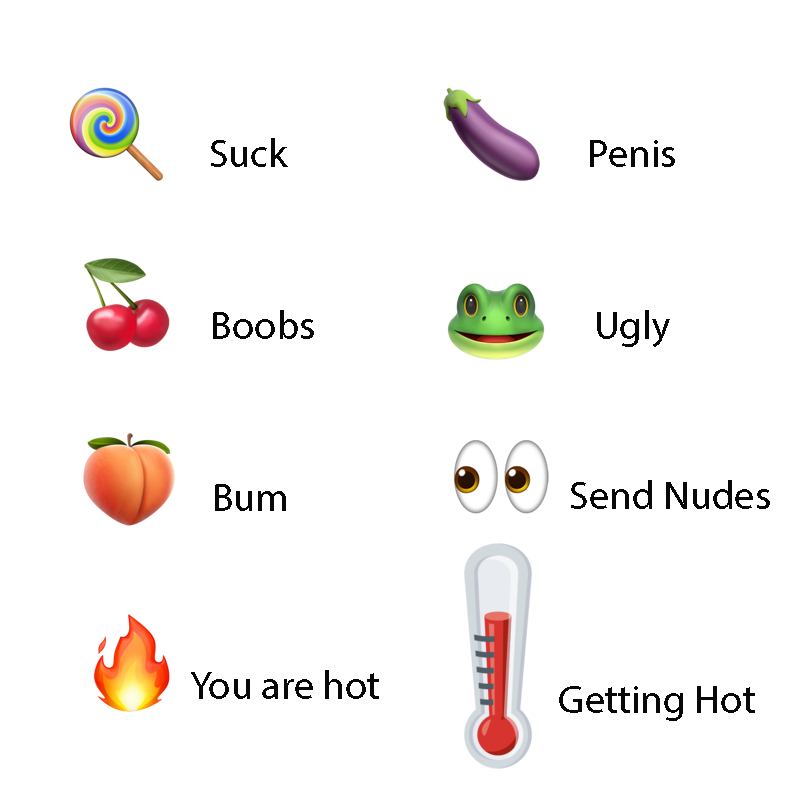 So if a child or young person receives a message like this (insert lolly and banana/aubergine) – you get the picture.  It could ring an alarm bell that the conversation may not be as innocent as it looks or that someone, perhaps an older someone may be using emojii’s rather than text – due to their ‘infinite deniability’ Massey University Media Studies Lecturer, Dr Patsy Duncan.

It’s important to remember that many emoji’s are harmless. We’ve been using pictographic symbols for centuries and many of us today are guilty as charged of emoji-overuse.

Either way, Emojii’s are now the world’s fastest growing language and young people’s medium of choice for online communication. So perhaps it’s time to catch up (emoji for catch up).

Keep an eye out for our next blog on Emoji’s